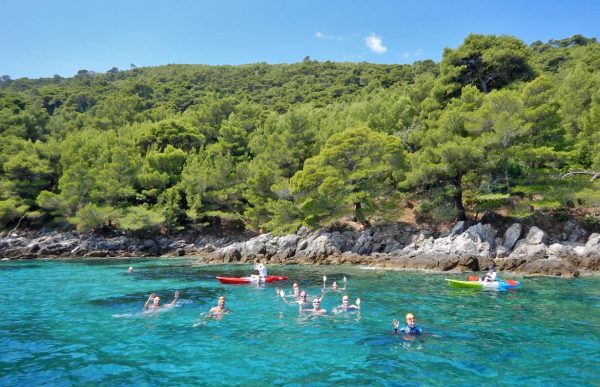 Read a great article written by our guest, professional writer and avid open water swimmer. She came from Toronto, Canada to do our five day Croatian island hopping swimming holiday.

I love to swim. Pools are fine, but my real passion is swimming in open water. I’m fortunate to live a stone’s throw from one of the world’s great bodies of fresh water. I swim in Lake Ontario for as much of the year as I can, but away from home, finding places to swim has always been a challenge. Then I saw Big River Man, the hilarious, awe-inspiring documentary about marathon swimmer Martin Strel, and learned that he and his son Borut have a company that runs “sea swimming holidays” in the Adriatic sea. It had never occurred to me to make swimming the focus of a trip. I decided to take the – pun intended – plunge.

Five days of “Croatian Island-Hopping” fit my schedule and budget. Croatia has a long, gorgeous coastline, with stunningly clear water and thousands of islands. The Strel Swimming website said we’d be swimming an average of 4 km a day. Having done several distance swims, I knew that wouldn’t be a problem. I was glad there was no mention of speed. Mine hadn’t improved much since I was nine, when I finished dead last in my first swim meet.

Our base was a small island hotel on the Dalmatian coast. Every morning after breakfast, I’d board a boat with a dozen other swimmers, head guide Borut Strel and a 3-person crew. Arriving at a pre-selected spot, we’d put on our caps and goggles, descend the side ladder, and swim for an hour or more – sometimes along the shore, sometimes island-to-island. After a hearty lunch, we’d head to another swimming spot. In between swims, we did some dry-land exploring, too – a haunting spot known as the “Island of Youth” with an abandoned camp and resort from the Soviet era, and Zirje, another island with ruins of a 6th-century Byzantine fortress.

In the water, I never felt alone or unsafe. We were escorted by two inflatables, and the main boat was never out of sight. Plus we were clearly visible to the guides, with our hot pink and electric yellow swim caps. The group was mostly Brits, a few Aussies, a Pole and a Swiss. They did have one thing in common, though: They were all faster swimmers than me – in a few cases, way faster. One had even swum the English Channel. Once again I was at the back of the pack. But I held my own. I never bailed on a swim.

Still, I approached the final night with trepidation.

Earlier that day Borut filmed each swimmer with an underwater camera, and showed the footage that evening at a Stroke Assessment session. I sat there, waiting my turn, hoping against hope that he’d say something like, “Kathleen, you’re slow but you have nice form.” But no. Turns out I don’t have nice form. My fingers are splayed. My legs are a drag – literally! Overall, my stroke is best described with a word no swimmer wants to hear: inefficient. I wasn’t surprised, or even discouraged. Through the week Borut had been unfailingly positive (“Great swim!” “You’re doing very well!”). It was the kind of vacuous praise I normally can’t stand, but out there on the water, it was just what I needed to hear. And now he was again telling me what I needed to hear, in the same warm, encouraging tone.

I’m already thinking about doing another swim holiday. Oh, I’ll work a bit on my inefficient stroke. I’ll probably still finish at the back of the pack, maybe even dead last.

And it won’t bother me a bit.

Kathleen McDonnell attended our Croatia swimming trip in June 2016. She is an avid open water in Toronto area and a professional writer. She´s been published in the Toronto Star, the Globe and Mail and other major publications in Canada. Her website: www.kathleenmcdonnell.com

We today operate a 5-day island hopping swimming trip in Croatia near Dubrovnik.