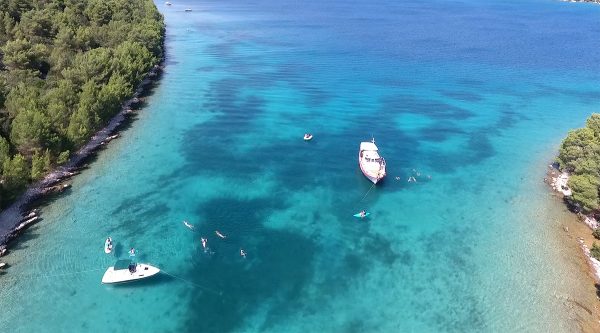 On our recent trips in Croatia and Montenegro, we captured some amazing aerial drone footage. Our swimmers are island hopping and also swimming along Croatian islands as well as the other areas that we visit. All clips are filmed during our swimming holidays along the Croatian Dalmatian Coast and Montenegro Fjords. Our swimming trips run from May to October.

Croatia with Dalmatian coast is the Adriatic gem which features several historic towns, stunning harbours and deserted islands.
Northern Mediterranean start right at the northern Croatia which is called Istra and the moving further south is called Dalmatia (North and South).

With all the Medieval towns such as Split, Sibenik, Zadar and Dubrovnik, Croatia’s coastline offers a wealth of travelling and sightseeing opportunities. Being on the Adriatic sea offers tremendous sailing and cruising options with reliable afternoon winds and more than 1,100 islands to explore. Most of the islands in Croatia as well connected with ferry companies.

We have been operating our sea swimming trips in Croatian islands since 2010. We offer two different trips, one in Northern Dalmatia near Sibenik and one in Southern Dalmatia near Dubrovnik:
Croatian Island Hopping – 7 days
Croatian Elaphiti Islands – 5 days

Why swimming in Croatia is so beautiful

Our base in Croatia, Krapanj Island, Sibenik Archipelago