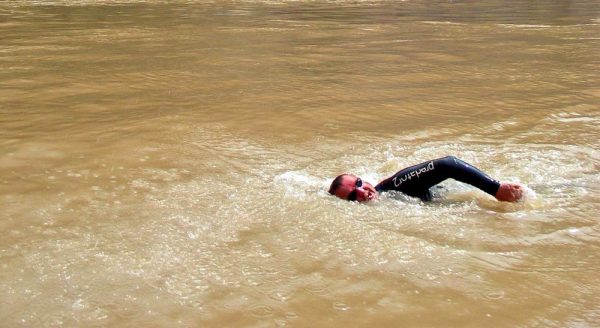 Not many of us can imagine that people would swim in the Yangtze river by choice. As today’s news spreads across the world of coronavirus starting in Wuhan, China, we look back 16 years to when our founder, Martin Strel, swam the length of this Chinese waterway. While swimming the river day after day he also stopped in the city of Wuhan where he was joined by local open water swimmers.

Swimming in the river is popular

Swimming in the Yangtze River in Wuhan is a popular activity as every year there is a mass swimming event where people cross the river’s width. Back in history, Mao Zedong, a former Chinese chairman, also swam in the Yangtze river and that’s why this river swimming tradition is still kept popular.

In June 2004 Martin started swimming in the Yunnan province under the Tibetan mountains and 51 days later he finished his marathon river swimming adventure in Shanghai. He swam 4003 km (2487 miles) for about 10 hours a day and remains the only person in the world to complete this incredible feat. Guinness World Records confirmed his incredible achievement.

The Yangtze River (Chang Jiang) is the longest river in China and the third-longest in the world. It has a source up in the Tibetan mountains and ends in the Yellow Sea near Shanghai. It flows through the 10 Chinese provinces and passes through the Three Gorges Dam, the world’s largest power station. The river is known for its heavy pollution and traffic due to the growing global economy and trade.

Nearly one-third of China’s population (400+ million) live near the banks of the Yangtze and rely on it for water, including the 25 million residents of Shanghai. The Yangtze’s mainstream pollution is a big issue on the rise and it seems to be a long term problem in this part of the world. The river receives more waste than any other in China, from factories, heavy metal industries, fertilizers, pesticides, inorganic compounds, and weed killing solutions. The water looks yellow-brown, stagnant, polluted and the visibility is very low. Marathon swimmer Martin Strel was badly affected by a local river infection while swimming in the river day after day, but he managed to survive. He was forced to take strong antibiotics and had to do several treatments after swimming for over a year to cure his liver.

While being on the river we spotted several beautiful river dolphins (locally known as baiji) of which some were part of Martin’s following day by day. The dolphins are known for their curvy pink noses. During our journey, we mainly spotted dolphins in the second part (lower end) of the Yangtze.

On a few occasions when entering the river we also spotted small alligators on the river banks. Supposedly they do not swim in the mainstream channel and keep themselves on the river shore, ponds, channels, and calmer water edges.

One of the scariest moments was seeing dead bodies in the river while Martin was swimming by. We were told that several people who live along the river do not know how to swim and when the river rises due to flooding many get swept away.

In 2004 Martin Strel’s swimming slogan was: “Swimming for peace, friendship and clean waters!” Everyone should work on keeping our rivers and waterways as clean as possible!

Video clip of Swimming the Yangtze River in China