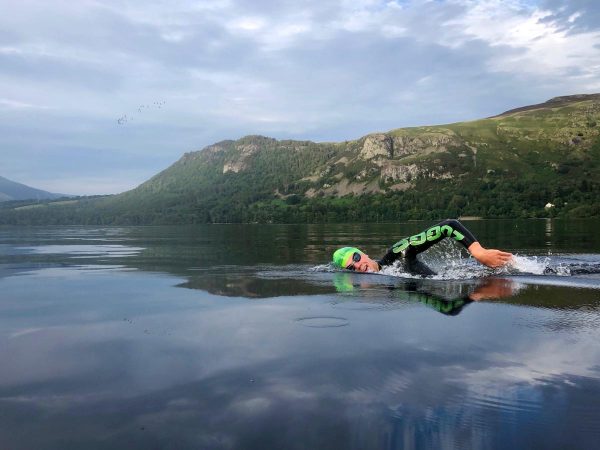 Day 1 started on a grey and windy beach on Lake Windermere’s north shore, the longest lake in England (17km). The lockdown sunshine had long gone and instead heavy rain had chilled Windemere to 14°C, far cooler than I had anticipated. A strong following wind helped me through the first 5km in 1 hour. I then settled into the planned schedule of 30 mins of swimming followed by a short drink from the support boat (my dad in an inflatable kayak). As we approached the southern end of Lake Windermere the waters had calmed and I finished the swim in 3hrs 58, only 10 minutes off the all-time record.

To complete day 1 I had another 8.8km swim along the length of Lake Coniston. A harsh headwind and Windermere’s fatigue still raw in my shoulders made for a tough swim, nevertheless I finished on Coniston’s lakeside pier 2 ¼ hours later.

Day 2: The challenge over to the Western Lakes

Wastwater, Loweswater, Crummock Water, Buttermere and Bassenthwaite. Whilst this was the shortest day of swimming (20km), difficult lake entry points required some trekking through midge infested bogs, and forgetting our food hamper also added to the day’s challenges! As we hopped between lakes we also had to allow time to change out of one wetsuit and into another and dry off the kayak to avoid transmitting invasive algal species between the lakes.

Wastwater was my favourite lake of the challenge; its chilly 12°C waters provide crystal clear visibility and it has a dramatic backdrop of Scarfell and Scarfell Pike – that said I had to swim fast to generate enough heat to stay warm! Day 2 finished on Bassenthwaite, a 6km long lake surrounded by stretches of forest. At this point the tendons between my tricep and elbow felt like wires under great tension, however the glassy smooth conditions and fantastic sunset helped take my mind off the aches and pains.

Any hopes of finishing the challenge were hanging in the balance as I set out on England’s second longest lake, Ullswater (12km). The previous 50km of swimming and cold water had caused my right shoulder to seize at the start of the lake and the slow pace meant I chilled to the point where I lost sensation in my hands and feet. In an attempt to mobilise my shoulder I did a few backstroke drills and then rolled onto my front to swim fast to warm up.

After an hour of hard swimming I could feel my core temperature rising and my usual swimming form returned. A strong following wind helped me surf the final few kilometres into Pooley Bridge, completing Ullswater in 2hrs 43.

The next few shorter lakes required a series of walks, drives and kayaking to get between Brotherswater, Elterwater, Grasmere and Rydal Water.

The final lake of the challenge was Derwent Water, a scenic lake with multiple forested islands. The wind had completely dropped as the sun started to set, creating what felt like a 4.6km long lido. During the final few kilometres I managed to block out the muscle fatigue and tendon stress and just enjoyed the evening sunset swim. It was an overwhelming feeling to see the end of the final lake come into view. Swim complete!

As far as records show, we were the first team to swim all the publicly accessible lakes in the Lake District in 3 days. Whilst the swim had been a huge physical demand for me it was only one component of the successful outcome.

My parents and girlfriend had to endure 300 miles of travelling, 6am starts, 9pm finishes, support kayaking and delivering thousands of calories of food to the lake shore; it really bought home the fact that these types of endurance challenges are never a solo effort and require a

The Lake District provided an incredible setting for this marathon swim challenge which has now raised over £4200 for Just a Drop. I encourage anyone to take up their own adventure challenge for charity, in whatever form that may be. You’ll learn a lot about yourself in a wild new environment and also have the opportunity to raise some money for a good cause.

Just a Drop are providing safe sustainable water access in villages worldwide. I’m very grateful for all the support and donations we have received so far and if you wish to donate there’s still time! (see the link below).

Please note: In the course of the challenge we made every effort to ensure we were using clean and dry kit when moving between the lakes to prevent the transmission of invasive algal species contaminating the pristine lakes #spreadthewordnottheweed

George is also our swimming holiday guide and you can join our trips to experience the guiding and technique skills with George.